This question comes up with almost every single couple I work with- who is supposed to be in the processional, and in what order?

Of course there are a ton of options and thanks to different religions, cultures and most people’s “non-traditional” families (sticky situations with stepparents, absent siblings, special people that are more family than your real ones etc.) every ceremony calls for something a little different. Gay weddings are super cool because we are making up the rules as we go!

Also, Champagne Poppers know that I believe in bucking tradition if it doesn’t mean anything to you, and do what feels right. That being said- here are my tips for designing your processional, with a mix of some traditions, and fun ideas to incorporate:

1. Grandparents, parents, or any other special family members that aren’t in the wedding party go first. Traditionally this is called a pre-processional. You can pick a different song for them, as long as there is at least 2 or more people walking down the aisle…if it’s too short it can be an awkward song change. One of my favorite ideas for this section is having the two mom’s walk down together. Mom’s don’t always get included so it makes them feel special, and kind of signifies a joining of two families. Mom’s don’t like each other? That’s cool…they can also be escorted by other family members. All of these folks should sit down right away. Traditionally, brides side is on the left and groom’s on the right. I recommend switching it up so that the parent’s are sitting where they can see their kid’s face! Or how about this idea where the parents sat behind the altar so they could see the bride and groom the whole time.

2. The groom. A few options. He can walk out first, with the officiant, to signify the ceremony is starting. They could walk down the aisle, or come in from the side and just stand up at the altar. I have also seen the groom escorted by his parents, or walk down alone before the groomsmen. Groom happen to be a conductor? He could always conduct his own orchestra during the processional like this wedding I did…ya. Pretty freakin’ badass.

3. The Wedding Party has two main options- either walking down in pairs (bridesmaids and groomsmen) or the guys can stand up at the altar already in line, and the ladies can walk down alone one by one. In case of uneven sides, I have seen a guy with a girl on each arm, or vice versa. UNEVEN SIDES ARE OK. Don’t feel the need to add some random cousin to your bridal party just because your fiance has too many damn friends. The order goes like this…the person standing the furthest from the bride or groom at the altar goes first down the aisle, and the maid of honor/best man (who is standing closest to the bride and groom) goes last. The people in the middle can go in whatever order you want. Sometimes they are arranged by height because it looks a bit more orderly in photos, or you can put your stinkiest groomsmen furthest away. Up to you.

Traditionally, ladies stand on the left and guys on the right. Not your best side? Switch it up…who cares really? Or how about this idea from a wedding I coordinated last year…the whole wedding party stood in a semi circle behind the bride and groom mixed up. 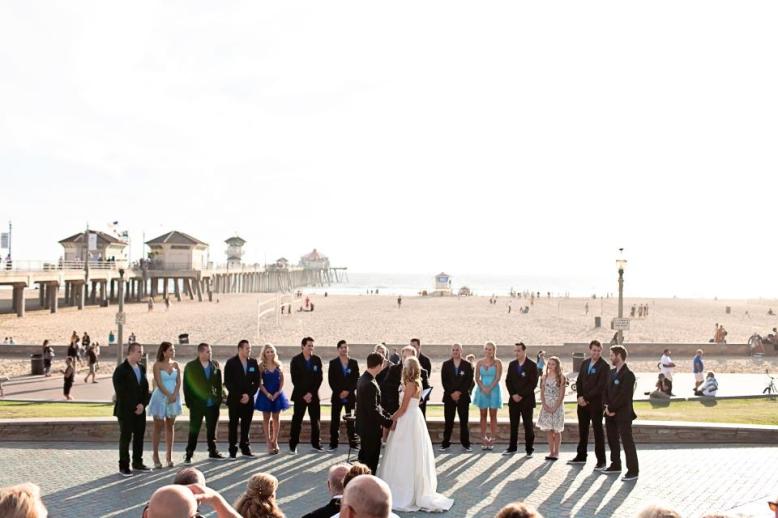 4. Kids. Flower girls and ring bearers go last, just before the bride. Do they need to be escorted by and adult? Will they be able to stand with the rest of the wedding party during the ceremony? That is up to you, and the parents. Kids are wild cards and sometimes the silly things they do turn out to be those “aw!” moments. Take for example, this little ring bearer who refused to wear shoes just before he was walking down the aisle in a very formal catholic church ceremony. What are you gonna do? You send him down barefoot!

5. The Bride escorted by whoever she damn well pleases, or maybe nobody at all. I personally went through a struggle of who I wanted to escort me down, and despite push-back for non-traditional decisions, I did what felt right and that worked for me.

6. Gay weddings: Every gay wedding I have had the pleasure of coordinating has been vastly different with the traditions the couple chose to embrace or skip and the processional is no different. Most often the processional looks very much the same as far as family and wedding party – and I have seen partners walk down together, or one at a time escorted by parents. Brainstorm a way to make the ceremony represent you as a couple and don’t let any heteronormative stereotypes get in the way!

And then…Recessionals can be quicker and less formal. As long as everyone files out in an orderly fashion that’s really all that matters. Bride and groom, then the wedding party- usually in the opposite way they walked in (so maid of honor and best man would follow the bride and groom). Parents can recess, or not, up to you. Start the party with a fun, upbeat song for the recessional and be sure your officiant or program gives directions for what guests are supposed to do next, ie. “Head over to the patio for cocktail hour”, or “At 4 the reception will begin at XYZ restaurant”.

Any tips or other unique processional/recessional ideas you have seen?

What do you think? Cancel reply

Unexpected color combos, lots of texture and dreamy light for Meg and Michelle’s @thereveryla wedding ✨
Bringing back our “weekly wedding vocabulary lessons!”
I’m not often speechless buutttt…..
“Oh shit! We did the damn thing!” - a series 🙌
I don’t think there’s another venue in LA that makes you feel so far away as @cielofarms 🙌 All the romantic views and vibes for Rhea and Matt’s gorgeous day 🍾
Fashion and surprise Elvis impersonators and kimonos and so many laughs 🙌 Taylor and Nick’s day was one for the books (it had been postponed about a million times so it was well earned!)